To start of the month, I thought I'd have a giveaway of sorts. There's no occasion, is just that I've found that I have 2 of the SAME quilt magazine: 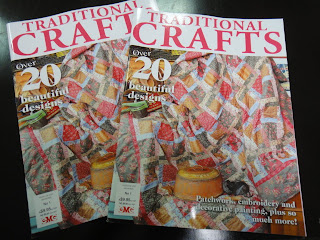 How did that happen?? I get most of my magazines from Baby Brother. He buys back issues of them for cheap then gets them sent over to me (err in case you're thinking what a sweetie he is, I'll have you know that this state of events was only made possible after a LOT of reminding/bribing/threatening. But he's a sweetie all the same, ehee!).

Anyway, he doesn't always pay attention to what he buys. And so sometimes I get two of the same.

So if you'd like a quilty magazine, just leave me a comment and I'll have it sent to you. Umm, if there is more than one comment, I'll have a draw and get Milo to pick a name after a few days.

I'd love your extra copy!!! Thanks!

Hullo ladies!
I hope you like the magazines - I've sent you an email :-)