I've not been very good about updating this blog this month, so I thought I'd squeeze in an extra post.

Now you know I sometimes like to tell a little story, so today I'm going to tell you about the mooncake. 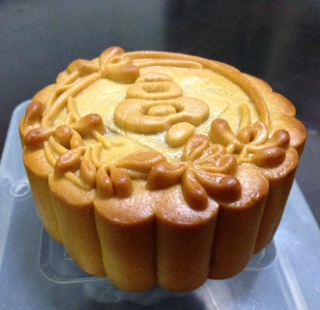 For those not in the know, the Chinese Mid-Autumn Festival is being celebrated hereabouts, and you can always tell when it's that time of year by the mooncakes that suddenly come into the market. Here in Malaysia we are very lucky because most of the mooncakes now are halal, and there's plenty of types and flavours to choose from. I personally love these dense little cakes, but only ever eat the traditional (boring?) lotus seed one with one yolk.

Anyway, the story is that once upon a time there was a chap called Huoyi and a lady called Chang E. I believe they were dieties but were banished to earth for some reason or another. In those days there were 10 suns (I know, I know - but it's a story so let's just read pretend). And one day there must have been a malfunction in the universe because all 10 suns lined up at the same time and burned the earth. So our hero Huoyi, who was also incidentally an expert archer, was summoned to shoot all but 1 of those suns. Which he did. As a reward he was gifted with a magic pill, which when taken would grant immortality. So Huoyi went home with the magic pill and hid it away in the roof beams. One day when he was out, Chang E saw a bright light coming from the rafters and found the pill. She must have been very curious, or perhaps she just had a headache at the time, because she swallowed the pill. Much to her surprise she discovered that she could then fly. So she flew around for a bit and soon found herself on the moon. The magic in the pill must have worn off by then, because she suddenly realised that she couldn't fly home. So she asked the rabbit that lived on the moon to make her a new pill so she could go home to see her husband. Unfortunately the rabbit is taking his time, and is still looking for all the herbs needed for the pill, so on the moon Chang E remains to this day.

Every year on the 15th day of the 8th month of the lunar calendar Houyi is allowed to go and visit his wife on the moon and the Chinese celebrate the mooncake festival, eat mooncakes and go around with tanglungs (lanterns). 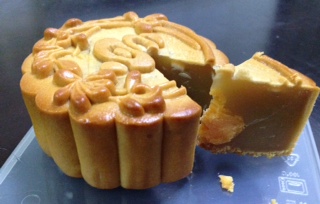 If you have a mooncake handy, you eat it with a nice cup of tea while gazing at the moon. Although I won't be doing that here, mainly due to all the rain we're getting at the moment.


And there you have it. The legend behind the mooncake festival - well, my version of it, anyway. So the next time you look at the full moon, try and see if you can spot the lady and her rabbit.

never heard of the story... love reading it :)

Glad you enjoyed it girls!