Things have gone a little haywire around here lately. To start with, one of the Meows was taken ill. We found a little hole in her tummy one morning (I know - eeeks!) and panicked all the way to the vet. I don't know who was screaming the loudest: Meow, Yummy Hubby or me. Turned out she'd had a little injury that was infected by a fly. Surprisingly, we learned that it isn't all that uncommon for cats. But a sick cat is still a sick cat, and if you've ever had to medicate (or quarantine) a sick cat you will know that lots and lots of mental and physical strength (and vitamins!) are required  for the owners to not fall sick themselves.

Anyhow, thank goodness Meow and her humans seem to be settling back into health again (touch wood, fingers crossed etc), and at least one of her humans is now desperately trying to rediscover some semblance of routine.

Which was when I realised that I've lost my creative juice. I don't know where I left it, but it's nowhere to be seen. Nothing is singing to me in The Office. Fabric is not jumping off the shelves at me in a haze of ideas. Such bleak, colourless days - ack!  Thank goodness there's the Olympics for some entertainment!

Anyways, I did manage to do a little cleaning and found a shoebox at the bottom of a storage bin. It's been in there for a couple of years now, and I'd completely forgotten about it.

Inside this box was a big bunch of fabric squares: 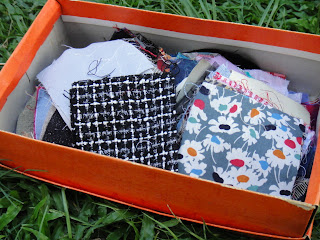 I remember Yummy Hubby had got me these on one of his trips. Looking at the selection leaves me wondering about shop he must have gone into to get them. There's a multitude of different fabrics in there, some look like they belong on curtains, some on carpets, some seem like they've been cut of a pretty summer dress, some from a rich brocade tunic. There're a few precious ones that could have belonged to one of Cinderella's ballgowns and plenty that could have come off the Queen's tweed suits. At that time I was fixated with American cotton and Moda etc, so when he gave me the squares I kinda just looked them over a bit and put them in the shoebox. 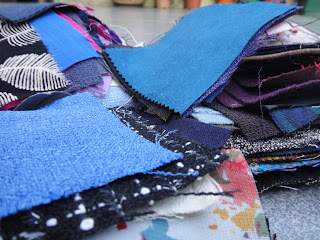 Fast forward to now, and although I definitely wouldn't turn down offers of Riley Blake and friends, I'm finding that all fabric has a value, so I'm thinking these squares would make a truely patchwork patchwork piece.

Like how I imagine patchwork to be back in the old days. Where blankets were made with true scraps.

The squares all measure approximately 3.5", and when I say 'approximately' I really do mean approximately. There're all slightly different.  Some of them aren't even square - just square-ish. But I'm NOT going to bother trimming them all to size. I don't think my sanity can deal with that after all the Meow excitement and what with Ramadhan going on around here.

So I'm just going to piece them together randomly. And to prove it, I've made a small start, see: 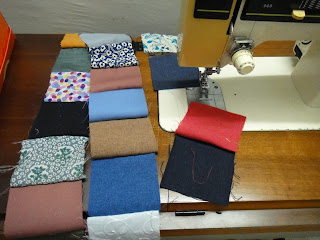 Progress hopefully soon. Till then, have a happy week!
Posted by Zara at 6:34 PM