A Tear For Our Ginger 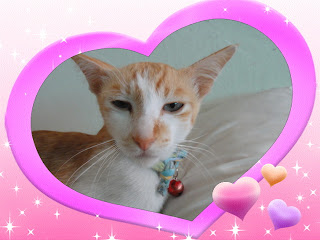 The story is that Ginger adopted us earlier this year. We can't recall exactly when, but Yummy Hubby and I have reached a consensus that it must have been sometime in February when this long limbed orange cat appeared in our kitchen. He just sat there on the floor, as if it was where he always belonged, and wasn't the least bit afraid of Yummy Hubby or me.
So we scratched our heads for a bit, then decided ah what the heck, he may as well have a bit of breakfast. So we fed him.
And fed him some more.
And fed him every single day after that.
After the first couple of days, it seemed that Ginger was part of the family. As if he had always been there. 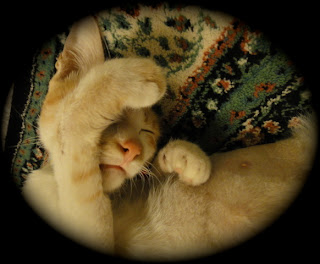 Now, we didn't know it at the time, but Ginger was already ill. He did display some little problems, but we thought it was just the normal cat troubles like worms and such and gave him tablets, you know, the way you do.
Then one day Yummy Hubby decided that he should be spayed (or is it neutered? I can never remember), and a trip to our local SPCA was made. There we discovered that he was jaundiced. Aahh.
So SPCA prescribed some medicine and we went home happy.
As the months went by though, we realised that although he seemed healthy enough, something was not quite right. For one, he never seemed interested in playing. And his tummy got bigger, and bigger.
Finally we took him to our expert Mr Vet, who diagnosed him with a virus. I can't remember what it was (even if I did, I don't think I could pronounce it, let alone spell it). And Mr Vet said that it was pretty serious.  From then on, Ginger made many more trips to the vet, and had all kinds of treatment, and at one stage was quarantined (very, VERY unwillingly) in the bathroom on doctors orders. Then one day while we were holding him down to administer some medicine, Yummy Hubby looked up at me, and I understood. 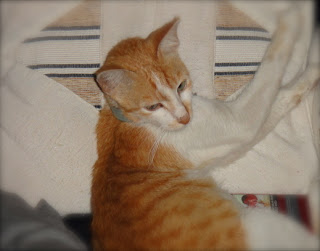 We stopped forcing him to medicate after that, and let him deal with each day as he pleased. We also made it a point to shower large doses of TLC on him every single day.
The end came sooner that either of us expected. He was still mobile and still had an appetite (his favourite dish being boiled chicken - none of that kibble stuff interested him). In fact, the very day before he died I spotted him taking a walk on the street outside, and on that same day had wolfed down a cup of boiled chicken.
So when Yummy Hubby picked me up from work one Monday on the first day of August and told me that Ginger was no more, I was ...
surprised.
Sad? oh yes, but
deep down glad too, that he went to cat heaven so easily and didn't suffer too much.
Like all the cats who's had a place in our lives, Ginger had his own quilt. But in breaking with tradition, we didn't bury him in it. I don't know why, sometimes another sense tells us otherwise you know, and we go with the flow. 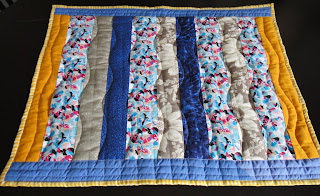 Thank you for adopting us, Ginger, even if it was only for a few months.
Sleep in peace now.
Posted by Zara at 9:11 AM

its always sad to read stories of cats passing away .... i can feel your sadness but like you said at least he did not need to suffer any longer .....