"The Office" a.k.a the sewing room is being redone. Nothing too major, we're just putting in a built-in wardrobe along one wall to hide all the junk. The room was just becoming too full of stuff. Not surprising really, as it serves also as a storage room and a study.

So anyway, in the process my sewing machine got (literally) buried under a pile of things, and I can't get within 2 yards of it it without rearranging half of the room.

In the meantime my blog is getting cold, so I'm going to show you a little something I made earlier. It's an easy way to give any corner of your home a new look. So here we go.

Take one chest of drawers from Ikea. 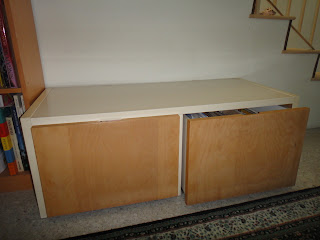 I use this chest to store our photo albums. Very practical, but a bit blah, don't you think? I figured it would also make a good two seater, so I got some plain white muslin and stuffing and made a nice two seater cushion. Like so: 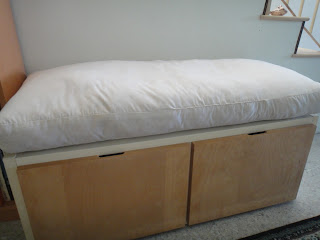 A bit more comfortable, but still a bit bland. So then came the cover. A simple navy fabric, for a nice clean look. 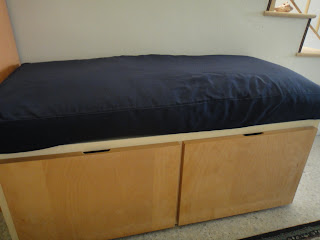 We were quite happy with the result, until the kitties decided to make it their unofficial day bed. Because the cover is a navy and therefore very dark, the fur left behind by my sleepyheads became quite visible. I spent some weeks religiously brushing the seat before deciding enough was enough and that something had to be done about it. And like a lightbulb going off in my head I decided a little quilted seat cover would do the trick nicely. The result: 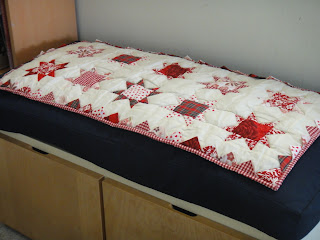 This little quilt is basically made up of Ohio Stars and Prairie points. 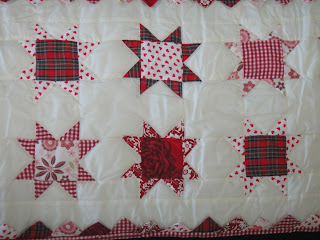 The beauty about this seat cover is, now all I have to do is wash the little quilt as the need arises.

Hope you had a good weekend everyone!
Posted by Zara at 12:07 PM

Zara, very practical and love the ideas. Lovely quilt, there!

I Like the border.. The overall quilt memang cantik

Thanks for stopping by. Always glad to be sharing ideas. Mila, the border is made up of prarie points. It gives a nice effect, but involves a litle bit more work:-)

hiya..
loving the 2-seater idea.. and very neat cushion.. sewing for my home almost always never gets the attention it requires *sigh*

The little cover quilt is superb.. I don't have the courage to work with triangles yet.. (I am really a scarredy cat at heart.. uhuhu) your prairie points look wonderful.. would you mind giving us some pointers on how to go about folding them to get that effect sometime..

p/s i was looking for your e-mail to get in touch with you..

Hi Sue! (it is Sue isn't it?)
Thanks for dropping by. Triangles are no problem for sure, you just have to give them a try. btw my email is afabriccase@yahoo.com, I'll be looking out for the cyber postman, hee.

how do you go about washing the cover? do you wash using the washing machine? oh do tell. i have the same classic case at home too-both Yuki and Cinta leave their fur on the love sofa, and I'm running low on (patience)the roller thing I got at Ikea. Apparently they do not sell the stickers anymore, only the rollers.
I've never quilted before, so if it's a go, i would really appreciate it if you could write on the rule of thumb for quilting a piece.

Hullo An Aspiring Writer! (What a mouthful, may I call you AAW for short?)
Welcome to my blog - and thanks for the comments. On washing all you do is pick it up drop it in the washing machine and away you go!

BTW, You know they sell the roller thingies in petshops too right, those are much more expensive then Ikea, but you can refill the sticky paper separately so I suppose in the long run it works out cheaper.

I tell you what, I'll make another little seat cover soon and post a tutorial on it for you to follow, ok?

Hugs to Cinta and Yuki!

hahah it is a mouthful ey? i also use AAW for short too!

as for the washing thing, i thought you might have a trick on handling pet's fur. but hey, washing machine IS the greatest trick of all! hhehe

where can i get the refills? i am so desperate for the refills, need them ASAP before my house turns into a cat pad instead of a human's home! i saw a scholl roller once- OMG so expensive! glad i bought my share at Ikea.

oh thank you for the patience for a tutorial! really appreciate the thought :) will be waiting patiently for it.