A Small Quilt With A Big Story

Now this is A Small Quilt With A Big Story. 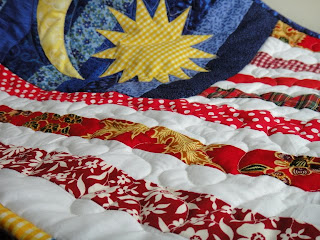 Make yourselves comfortable, because I'm going to tell you the story.

On 31st August 1957 Malaysia celebrated independence. Formally from British colonial rule. A long time ago, in 1786 to be exact, an English trader, Captain Francis Light, while sailing on his boat one day landed on the island of Penang in the Malay Peninsula, and therefrom began a history of British rule. He's still there, in Penang, and you can visit his grave if you happen to be passing through.

Now this part of the world was quite popular at that time, because of it's strategic position in terms of regional trade. We had people from all sorts of places coming ashore to trade.

Which was why another state, Malacca, became very popular as a trading zone. The Dutch came and colonialized Malacca for a while, but eventually in 1824 a treaty was signed which officially turned Malacca over to the British as well. Next in line was Singapore (you may have heard of Stamford Raffles?) which was a part of Malaya at that time, and the British stronghold on the three major trading hubs on the Malay Peninsula was complete.

Some time passed and British Malaya continued to expand to the other states on the Peninsula. We all lived quite simply and comfortably, until the Japanese came and did their thing in the 40's. It was a terrible time, and I vividly remember some of the gruesome stories my grandparents have told. Everyone was affected, whether Malayan or otherwise. When the war ended and the Queen re-established her reign over Malaya, we thought life would go back to its blissfully ignorant state. But not so. We then had to deal with communist insurgents.

This was a very bad time too. There was an emergency, and thousands of people, including innocent villagers were killed. For us here, it was almost as bad as the war itself. Many, many people came in selflessly to help us, some at an immense cost to themselves. British, Chinese, Gurkhas, Aussies to name a few. Finally, under the helm of the no-nonsense British High Commissioner Sir Edward Gent, the communists were defeated, and its leader the notorious Chin Peng exiled to Thailand. What followed was a road paved for self-government, and independent Malaya was born on 31st August 1957, with Tuanku Abdul Rahman as our first Prime Minister.

We are also celebrating our Malaysia Day on 16 September, to remember the formation of Malaysia on that day in 1963, when we were divorced from Singapore. 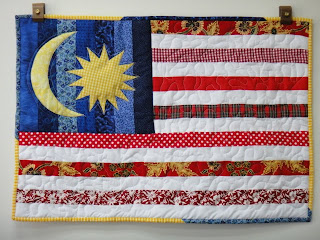 Today Malaysia is gratefully peaceful and multi cultural. A Small Quilt With A Big Story is my small tribute to the past, to our history, our people, and to others from various parts of the world who played a part, whether big or small, in making it what is today. Without them, we would not have this abundance of opportunity to live, love and quilt in peace and harmony.
Posted by Zara at 10:13 AM

Dear Zara,
That's really nice "Bendera Quilt"!
Thanks for dropping by & left a sweet comment on my blog. Really happy to have found yr blog via "Quilting Bloggers". @>->-

Hi totally loved your blog and the way you write, I adore Malaysia we visit for 6 months of the year and stay in Penang , where abouts are you , we live in London the rtest of the time .
we are due to visited there again in November
I have only found 2 quilting shops in Penang , but this year I am planning a trip to KL and hope to shop there , any recomendations welcome

Thanks for dropping by! I'm in KL, and as you may guess quilt shops are few and far in between here in Malaysia, but I'd be happy to recommend one or two shops for you.
It may be easier if I could email you the details though...